The No Man’s Land of Change: The Paradox of Change and Stability 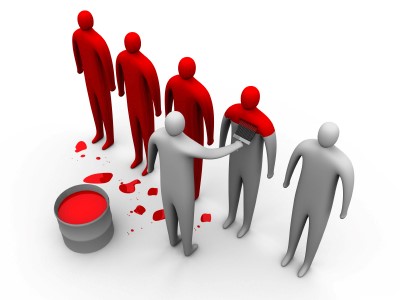 We humans are funny animals.  Even though we are hard-wired to desire growth, we are also hard-wired to embrace and protect what we already know — even if it means undermining our forward progress.

For example, we may understand the need to move to a new location…but we don’t want to leave the old one.  We may be impatient to get the desired results…but we’re  often initially resistant to make the necessary changes.  But we can’t move forward without letting go of something from the past.

In other words, we want (and need) a hefty dose of stability along with our change.

Without people, nothing can change in an organization.  Corporations are legal entities for legal and tax purposes, but the actions that are taken by the organization as a whole represent the intentions and behaviors of its people — both jointly and individually.

Research has repeatedly shown that changing everything at once inevitably leads to failure.  This is at the heart of the change resistance and burnout that occur during transformational organizational change.

Attempting to change everything at once is a failing strategy that is frequently used when companies identify an urgent need to transformationally change  the workplace.

But you don’t need to change everything in order to create workplace chaos.

Replacing legacy products, services, operations, and people also creates a sense of chaos throughout the workforce.  Although employees are urged to relinquish the security of the familiar status quo, they don’t yet have something new to replace it — so they become frustrated and resist making the necessary changes.

This gap between the known past and the unknown future is the “no man’s land” of change.

People will only successfully change — or make that leap across change’s “no man’s land” — if there is a certain level of stability in their work environment.  Even though many things might need to be changed, the organization’s core values must be kept intact.   These core values provide a guiding star that helps keep workers on track and the company’s DNA intact.

By counterbalancing change with pockets of stability, change leaders are better able to address the their workers’ innate need for growth with their equally important need for security.

While change can be exciting and fuel growth, humans need to feel secure that some things are not going to change — that there are still areas of the status quo on which they can rely.

The best way to ensure this balance is by creating a map for the change journey.  This action plan propels the workforce toward a worthy goal and desirable outcome in addition to reinforcing those policies, processes, procedures, relationships, and values that have been the foundation for past organizational successes.  This requires understanding why something has worked or not worked in the past.

Chaos ensues when change leaders overlook the need to understand why previous actions or policies led to specific results.  The successes in the past should be scrutinized for clues as to why they succeeded.  If these characteristics are aligned with the desired results of the change initiative, then these becomes areas of stability that should be retained as the change initiatives unfolds.

And if something didn’t work in the past or isn’t aligned with the outcomes of the change initiative, then it should be not only be abandoned, but also replaced with a more viable alternative.  This requires creativity in the identification and development of new ideas.

Again, it is the “no man’s land” of the transition from what was to what will be that creates resistance and burnout in employees.

“Business as usual” is no longer the norm.  The rapid enhancements in technology have forever changed global markets, customer buying patterns, and the workplace in general.  Just because something worked in the past does not necessarily mean that it will work in an often unknown future.

When the business environment is characterized by constant and unrelenting change, blindly adhering to the status quo will assuredly lead to failure.

These assumptions and paradigms of how their business “works” are at the core of why many companies are slow to introduce change in the workplace:

The visionary employees who warn of trends that could undermine the company’s visibility are frequently ignored and ridiculed.  But when the company’s leaders finally acknowledge these warnings, these visionaries are usually long gone from the company – and are often working for competitors!

As I’ve mentioned previously, a certain level of stability is essential to comforting the workforce when organizational leaders are demanding that transformational changes occur.  But providing stability is NOT blindly adhering to the status quo.

It is therefore crucial for organizations to nurture flexibility and adaptability in employees:  skills that are critical for both sustainability and growth.

Innovation and growth are the foundations of sustainability in the 21st century.  Without change, the organization is merely surviving — which is the equivalent of standing still.  But science has taught us that nothing ever stands still, but is either moving forward or moving backward.

How to Embrace Change By Ensuring Stability

Having a core foundation of values that resonate with the very human needs of the workforce (e.g., respect, integrity, commitment to excellence) will unleash the creativity and innovation of the workforce in moving forward.  These values provide the critical sense of security and stability that frees workers to let go, move forward, and change.

When change and stability are balanced, it creates an evolutionary expansion of what is good for both the company and its people.  Change is no longer something to be feared, but rather something to be enjoyed and embraced as new opportunities emerge.

And if the company recognizes the need for a complete transformation, it is more likely to succeed when moving forward from a foundation of stability  — rather than reacting blindly toward an unknown or ill-defined future.

The fundamental need for change/growth and stability/security is hardwired into humans —  and, without people, there is no company. By introducing elements of both into the change management strategy, organizations are more likely to create sustainable change without demoralizing and burning out their workers.

3 thoughts on “The No Man’s Land of Change: The Paradox of Change and Stability”

What do you REALLY need to recover from burnout?

Are You Resilient at Work? [VIDEO]