Broken Promises: What to Do When Change Managers Promise What They Can’t (or Won’t) Deliver 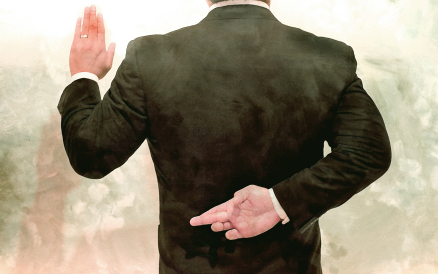 Trust and promises go hand-in-hand.  We were taught this as children.  We expect it from our friends and family.  And we demand it from our employers and co-workers.  But during organizational change, far too many managerial promises are broken.

As anyone who has gone through organizational change can attest, the change initiative rarely unfolds as planned and many of the promises relating to the changes are discarded.

Whether or not a reason is given as to why the promise could not be met, broken promises by change leaders erode organizational trust.  When this happens, it is not surprising that employees believe that they have been lied to.

Denis Waitley noted that “Losers make promises they often break.  Winners make commitments they always keep.” In other words, integrity is critical to success.  Particularly in the area of organizational change, it is imperative that change leaders anticipate the obstacles that may hinder their ability to actually do what they say that they are going to do.

And if they can’t follow through, then every effort should be expended to rebuild the trust that has been lost.

Why are so many promises broken in the modern workplace?  Do they represent intentional lies used to cajole workers to do what we want them to do?  Or do they reflect a chain of broken promises that permeates the culture?

In other words, should we expect that change leaders will lie in order to “sugar coat” the challenges and difficulty associated with the change initiative?

Is the Environment to Blame for Broken Promises?

Even when the organization is undergoing change, today’s 24/7, hyperactive, hyper-competitive workplace is a fertile environment for broken promises.  When workers have too much to do, not enough time to do it, and constantly changing demands, it is inevitable that meticulous plans will be compromised.

When the organization is changing, the assumptions upon which promises were made may also change — but it is how this is communicated to the workforce that determines whether trust will be eroded.

Truth is a cornerstone for any successful relationships — especially those at work.  Honesty is the foundation for effective team building, knowledge sharing, and emotional support during difficult times.  Honest transactions and promises that are kept make deposits into the emotional bank accounts of each employee’s individual relationship with co-workers, colleagues, and managers.  During times of stress (such as organizational change), workers across the workplace hierarchy rely upon this history of good will and trust in order to put forth the necessary effort to achieve new goals.

Unfortunately, truth and honesty appear to be increasingly rare in the modern workplace.  This makes it increasingly difficult to build and sustain a culture of trust.

When a change leader breaks a promise, employees will immediately assess whether the action (or inaction) was intentional OR was it the result of unforeseen circumstances over which the change leader truly did not have any control.  While there are many reasons that promises may be broken, the far-reaching cultural effects of broken promises should not be minimized.

Trust is earned, not given.

A culture of trust takes time to build and takes concentrated effort to be maintained.  A single broken promise can have disastrous results for the employee who relied on that promise.  It can single-handedly destroy the trust that may have taken years to nurture and establish.

And if promises continue to be broken, employees will view this pervasive deceit as proof that their workplace culture cannot be trusted.  Without trust that the company has their best interest at heart, employees will rarely put forth the additional effort needed to manifest the goals of the change initiative.

When there is no culture of trust, employees will become frustrated, angry, apathy, and burned out.

When a manager breaks a promise to subordinates, a noticeable shift in the relationship follows — and, if the impact on the employee is substantial and negative, the loss of trust may be irreparable.

In order for employees to feel sufficiently safe and comfortable with changing, they must trust that what is promised to them by change leaders will be realized.

The foundation of trust rests on believing that what people say is the truth and that what they promise will be forthcoming.  Since employees don’t work in isolation, promises lead to expectations of specific outcomes or resources that will help the worker efficiently and effectively complete tasks and projects.

When a change manager commits to providing much needed resources, it significantly influences timelines, action plans, and financial decisions.  We depend on the promises made by others and modify our actions, goals, or strategy based on them.

Trust is crucial to effective organizational changers.  Managers who have a reputation for promising but not delivering create emotionally difficult work environments that hinder productivity.  When employees make promises that are contingent upon someone else’s promise to complete a task at a given time, trust is diminished across all these work relationships.

An organization in which broken promises are the status quo creates a culture in which tempers flare and skepticism permeates future dealings.  As employee morale decreases from this pattern of deceit, both the organization and its workforce suffer the consequences.

Continual broken promises by management can lead to employees believing that the organization no longer cares about them — a common organizational factor that leads to burnout during organizational change.  But a single broken promise made in a culture of trust generally will not deteriorate that culture into one of mistrust and deceit.

But when promises are routinely broken during organizational change, a hard look should be taken to determine the frequency of those lies as well as the intensity of their results on employee productivity and morale:

How to Make and Keep Promises During Organizational Change

In numerous conversations with colleagues, it appears that there is a consensus that workplace trust is at an all-time low.  Broken promises and unmet expectations result in missed deadlines, subpar performance, and continual withholding of resources. Therefore, organizational productivity and performance can sufficiently deteriorate into lost profitability and sustainability.

Forthright honesty and transparent are the cornerstones of engaging employees during organizational change.  Due to the “no man’s land” of change, employees will naturally experience trepidation as to what will remain the same and what will be transformed.  The workforce will rely on the words and promises of change leaders in order to determine whether or not to commit or resist the demand for change.

So, never promise what you can’t or won’t deliver!  If you are unsure that you will be able to follow through, then be transparent and forthcoming about your concerns so that your co-worker is given a choice in whether or not to rely upon your promise in doing his or her work.

Don’t “make nice” by continuously promising and assuring them that you can follow through with your promise IF you have any doubt as to your ability to do so.  This only intensifies expectations and further affects workflow.  Express your concerns if there is any doubt about that you will be able to deliver, based on the standards and timeline that were promised.  “Coming clean” at the last minute increases stress levels and workloads and may sabotage successful completion of the project.

Even if you are honest about the doubts that you may have about providing the promised resources, remember that expressing these doubts does not serve as an excuse to not follow through on what you promised. Simply “warning” a co-worker that there might be a problem does not absolve you of your commitment to follow through.

Promises are commitments that need to be honored.

Stuff can and will happen.  Circumstances can and will change.  Be transparent.  To avoid destroying hard-earned trust, immediately notify the worker who is depending upon you and then diligently try to find an alternative option to what you had promised.

Above all, don’t focus on the litany of events leading to your broken promise.  Employees will interpret this as an excuse or rationalization of your behavior.  It is important to acknowledge rather than deny or rationalize the fact that you failed to do what you promised.  It is even more important to empathize with the effect that your broken promise has on your co-worker.

The only effective way to empathize is by actively listening to the employee’s frustration.  Acknowledge and apologize for your mistake, acknowledge the inconvenience or delay that it caused, and actively search for other options.

Broken promises make withdrawals from the relationship’s emotional bank account.  By committing to meeting future promises, you can begin to rebuild bridges, strengthen the relationship, and move forward.

Should Managers Be Disciplined for Breaking Promises?

A “one strike only” disciplinary policy might be too harsh when dealing with a manager who broke a single promise — but, of course, that depends on the severity of the resulting ramifications.

Consider the context of the broken promise.  While finding the underlying cause may be difficult, it is critical in order to avoid focusing on symptoms rather than the real problem.  Disciplinary practices reflect organizational culture — but just as the manager needs to empathize with co-workers, so too do senior leaders need to empathize with the effect that their action (or in action) contributed to the manager’s broken promise.

Managers must take responsibility
to honor the commitment inherent in their promises.

Organizational change can create upheaval in routine processes, resulting in greater fluidity in the situations and circumstances that affect workflow.  Perhaps the manager genuinely believed that he or she could fulfill the promise made to subordinates or co-workers given prior circumstances.  Empathizing with the effects of these altered circumstances will enable you to continue to support a relationship built on trust.

The changing circumstances that contributed to the manager’s broken promise may have reflect the “trickle down” effect of senior leaders own actions and promises.  Absent a propensity for falsehoods, broken promises are best reviewed in terms of context.  In other words, listen to the parties who were affected by the broken promise and strive to create a win-win outcome.

However, if the manager habitually lies and breaks promises, then his or her honesty and integrity should be questioned.  Depending on the situation, coaching and/or discipline are warranted.  Truth and integrity are critical ethical cornerstones in successful business management — and some broken managerial promises can lead to legal actions or litigation against the organization.

But absent a managerial lie that falls under the purview of fraud, broken promises most frequently affect workplace relations with a “trickle down” effect on productivity, employee engagement, morale, retention, and innovation.

A culture of trust is the antithesis of deceit, lies, and broken promises.  Perhaps building, nurturing, and sustaining a culture of trust should be an element in your next organizational change initiative.

3 thoughts on “Broken Promises: What to Do When Change Managers Promise What They Can’t (or Won’t) Deliver”

<strong>How I Use Priorities to Avoid Burnout (and you can, too!) </strong>

The Stealthy Downward Spiral to Burnout